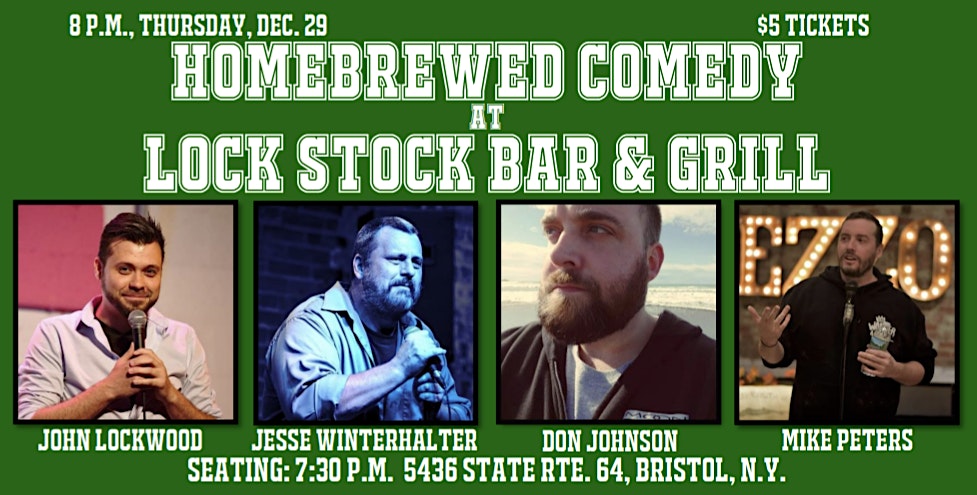 The laughter is coming to Bristol when Homebrewed Comedy hits the stage at Lock Stock Bar & Grill on Thursday, Dec. 29. Tickets are $5.

The laughter is coming to Bristol when Homebrewed Comedy hits the stage at Lock Stock Bar & Grill on Thursday, Dec. 29. Jesse Winterhalter is headlining the show and Don Johnson and John Lockwood will join host Mike Peters.

The show starts at 8 p.m., and we’re asking for a $5 donation at the door. Seating begins at 7:30, so come out and enjoy the show and tip the bartenders extra well.

Mike Peters, a Binghamton comedian, specializes in self-deprecating, observational humor. A contributor for Funny or Die, Peters is the founder of Homebrewed Comedy. He hosts at the Syracuse Funny Bone and WiseCrackers in Wilkes-Barre, Pa., won the Utica Brews Laugh Contest and Uptown Roast Battle and opened for Super Troopers’ Rabbit, Erik Stolhanske and Gilbert Gottfried. Peters produces shows all over New York and hosts his weekly podcasts, On the Mic with Mike Peters and It’s About Time: A Sopranos Watch Podcast.

A well-traveled comedian from Buffalo, John Lockwood is known for clever writing and the ability to find a joke in anything, often to the dismay of those around him. A comic with a love of non-sequiturs and a flare for finding logic in the ridiculous, Lockwood looks like a handsome jerk and talks like a crazy person. He’s possibly the only optimistic comedian in the world.

Hailing out of Buffalo, Don Johnson mixes situational absurdity and self-deprecating earnestness. A regular at the Helium Comedy Club, Johnson hosts its local favorite Dirty Show and he’s opened for Tony Roberts and Jason Mewes. Johnson proves that if you can’t laugh at your surroundings, you may as well be livin’ in a box.

Jesse Winterhalter is comedian from Buffalo N.Y. In addition to headlining his own shows, he worked with some of the country’s best comics, including Colin Quinn, Big Jay Oakerson, Robert Kelly, Kurt Metzger and many others. He’s performed at The National Comedy Center in Jamestown, N.Y., and a variety of comedy clubs around the country. He is also on the “Bourbon Legends” podcast and runs a weekly show at Milkies on Elmwood.