There’s a new band on television! Mashing up funk, rap, and their own distinct brand of positive vibes. You can catch them every Wednesday night on Food Network’s new show “Guy’s Ultimate Game Night,” where celebrities compete, laugh, dance, and congregate around culinary-themed party games. And it’s all for the charities of their choice!! But who’s this band that’s the life of the party? Who is Sophistafunk?

From underground shows to international festivals, Sophistafunk has been described as “Rage Against the Machine meets The Roots, dipped in P-Funk.” They’ve also become widely known on the touring circuit as a rare Hip Hop meets live electronic jam band, performing multiple sets at Electric Forest and Camp Bisco (USA), as well as BoomTown and Shambala (UK), to name a few. They’re well known from New York to New Orleans, and have particularly strong followings in California, Colorado, Michigan, New England, and the Great Northwest, among others.

After celebrity chef Guy Fieri became a fan of the band, he invited Sophistafunk to perform at many of his events and private parties around the country, including at the Super Bowl in Tempe, AZ. The band even appeared twice on his TV show “Diners, Drive-ins, & Dives.” They were also featured as the house band for four episodes of “Guy’s Grocery Games” and in 2020 premiered a music video on Food Network’s “Triple D: Takeout Edition.” Sophistafunk’s multi-year relationship with Fieri culminated in the invite of a lifetime: to be regular cast members on his brand new game show!! Add a little funk, and “Guy’s Ultimate Game Night” was born! The rest is history.

Sophistafunk is for music lovers. Through the years, they’ve become one of the most exhilarating and fulfilling live music experiences around. They blend genres as a broader analogy for people coming together, leaving audiences with an undeniable afterglow of funky positivity. For years, Sophistafunk has been pioneers on the live music circuit, unafraid to push boundaries with their sounds and their messages. And now the whole world is finding out. Catch a show, and join the party!

“Simply a Loving Soul Brotha that loves to entertain, FelixFree is a family man and Truskool MC with honest, clever wordplay, positive energy, and most of all: real HipHop! He is a founding member of the internationally known Luminaries band, and is also known and loved for his contributions and performances with Venice California’s House of Vibes All Stars, and Southern Oregon’s Free Creatures.

Grown in Southern California, Felix Free moved his family from the ‘Hood to the Woods’ of rural New York state seeking space and nature for his wife and children, as well as a place to enjoy his favorite past-time- fishing. Thus is the name of his debut E.P., ‘Hood to the Woods’, which is a high energy, thoughtfully entertaining and uplifting collection of 5 songs that cover a balanced range of topics and feels.

Felix Free’s seasoned stage presence is welcoming to crowds in rooms both huge and intimate; he without fail warms the hearts of all who watch him perform, luring them in while lifting their spirit; both breaking barriers and inspiring an elevation of faith in everyone who hears him. His lyric “I don’t know you, but I still want to see you shine- Good people, good vibes” sets the tone for his entire show.” 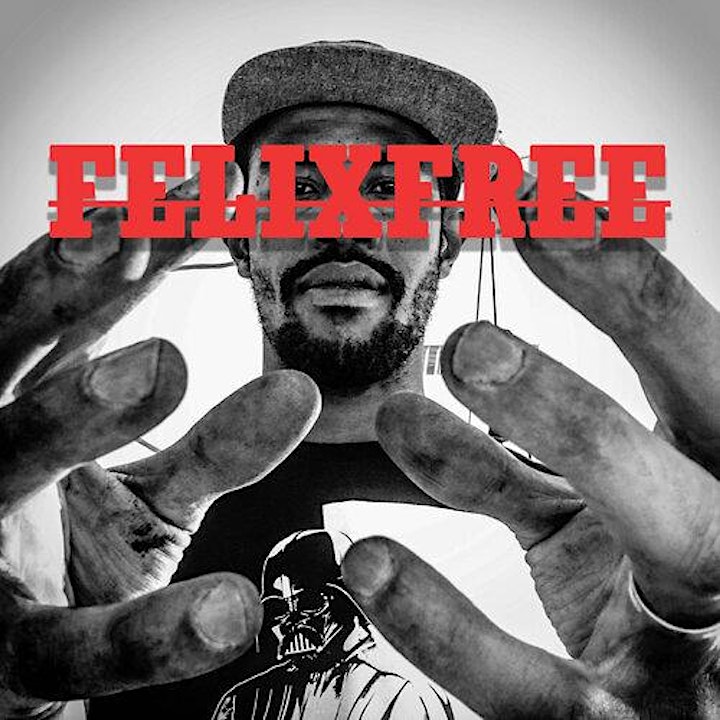