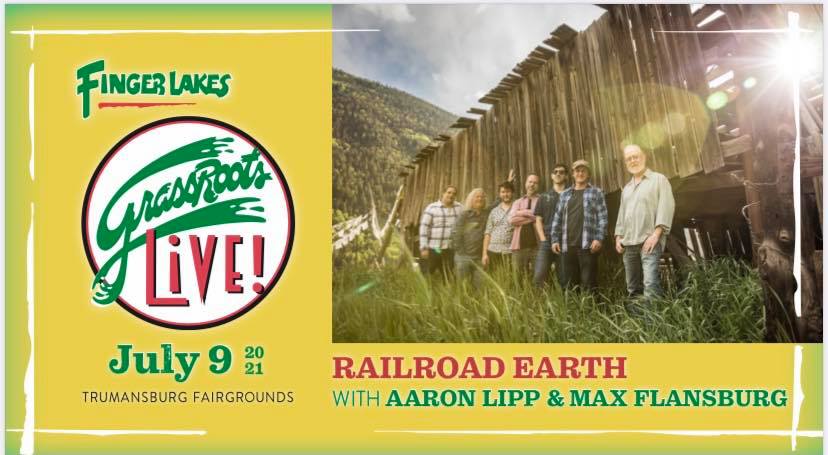 There’s a great scene in The Last Waltz – the documentary about The Band’s final concert – where director Martin Scorsese is discussing music with drummer/singer/mandolin player Levon Helm. Helm says, “If it mixes with rhythm, and if it dances, then you’ve got a great combination of all those different kinds of music: country, bluegrass, blues music, show music…”

To which Scorsese, the inquisitive interviewer, asks, “What’s it called, then?”
“Rock & roll!”

Clearly looking for a more specific answer, but realizing that he isn’t going to get one, Marty laughs. “Rock & roll…”

Well, that’s the way it is sometimes: musicians play music, and don’t necessarily worry about where it gets filed. It’s the writers, record labels, managers, etc., who tend to fret about what “kind” of music it is.

And like The Band, the members of Railroad Earth aren’t losing sleep about what “kind” of music they play – they just play it. When they started out in 2001, they were a bunch of guys interested in playing acoustic instruments together. As Railroad Earth violin/vocalist Tim Carbone recalls, “All of us had been playing in various projects for years, and many of us had played together in different projects. But this time, we found ourselves all available at the same time.”

Songwriter/lead vocalist Todd Sheaffer continues, “When we started, we only loosely had the idea of getting together and playing some music. It started that informally; just getting together and doing some picking and playing. Over a couple of month period, we started working on some original songs, as well as playing some covers that we thought would be fun to play.” Shortly thereafter, they took five songs from their budding repertoire into a studio and knocked out a demo in just two days. Their soon-to-be manager sent that demo to a few festivals, and – to the band’s surprise – they were booked at the prestigious Telluride Bluegrass Festival before they’d even played their first gig. This prompted them to quickly go in and record five more songs; the ten combined tracks of which made up their debut album, “The Black Bear Sessions.”

That was the beginning of Railroad Earth’s journey: since those early days, they’ve gone on to release five more critically acclaimed studio albums and one hugely popular live one called, “Elko.” They’ve also amassed a huge and loyal fanbase who turn up to support them in every corner of the country, and often take advantage of the band’s liberal taping and photo policy. But Railroad Earth bristle at the notion of being lumped into any one “scene.” Not out of animosity for any other artists: it’s just that they don’t find the labels very useful. As Carbone points out, “We use unique acoustic instrumentation, but we’re definitely not a bluegrass or country band, which sometimes leaves music writers confused as to how to categorize us. We’re essentially playing rock on acoustic instruments.”

Ultimately, Railroad Earth’s music is driven by the remarkable songs of front-man, Todd Sheaffer, and is delivered with seamless arrangements and superb musicianship courtesy of all six band members. As mandolin/bouzouki player John Skehan points out, “Our M.O. has always been that we can improvise all day long, but we only do it in service to the song. There are a lot of songs that, when we play them live, we adhere to the arrangement from the record. And other songs, in the nature and the spirit of the song, everyone knows we can kind of take flight on them.” Sheaffer continues: “The songs are our focus, our focal point; it all starts right there. Anything else just comments on the songs and gives them color. Some songs are more open than others. They ‘want’ to be approached that way – where we can explore and trade musical ideas and open them up to different territories. But sometimes it is what the song is about.”

So: they can jam with the best of them and they have some bluegrass influences, but they use drums and amplifiers (somewhat taboo in the bluegrass world). What kind of music is it then? Mandolin/vocalist John Skehan offers this semi-descriptive term: “I always describe it as a string band, but an amplified string band with drums.” Tim Carbone takes a swing: “We’re a Country & Eastern band! ” Todd Sheaffer offers “A souped-up string band? I don’t know. I’m not good at this.” Or, as a great drummer/singer/mandolin player with an appreciation for Americana once said: “Rock & roll!”

Aaron is from Naples, NY and has been a professional musician since age 16. From performing on stage, recording in the studio and teaching lessons, he has found his place in music . Throughout a multitude of different genre adventures and instrumentation, he has found home in traditional Appalachian old time music, classic bluegrass sounds, and the blues – all fused into a new sound of the next generation, while paying tribute to the traditions of our ancestors.

Aaron grew up in a musical family and began playing piano at age four. Throughout childhood, he picked up other instruments such as drums, bass, guitar, trumpet, organ, harmonica, and more. Coming from a musical family he was surrounded by all types of music from a very young age. From folk and bluegrass to rock and blues, these early years were the foundation of a long musical journey. Later in May 2006, Aaron joined Giant Panda Guerilla Dub Squad, a local Rochester Original Roots Reggae and Dub band. He played a multitude of instruments for the group including Rhodes, Clavinet, Hammond B3 Organ, slide guitar, harmonica, wurlitzer, lap steel, guitar, and banjo. In a span of six years. During this era, Panda put out two live albums – “Live Up! Vol.1 & 2”, and two studio albums – “In These Times” & “Country.” Giant Panda toured constantly all over the country logging nearly half a million miles on the road. Panda later released “Steady” and “Bright Days” which feature Aaron on many instruments and harmony vocals. Throughout these years on the road and little time at home, Aaron dove heavily into Old Time and Bluegrass music, learning the traditional practices of clawhammer banjo, bottleneck slide guitar, dobro, flatpicking guitar, blues harp, old time fiddle and upright bass. Sacred steel music on the Hammond Organ and Lap Steel guitar was heavy in motion for the next musical touring adventure.
In March 2013, Aaron began touring with internationally renowned pedal-steel funk/soul guitarist Robert Randolph & The Family Band playing Hammond B3 Organ, Keyboards, Guitar and sang backup vocals for the group. During this time, he shared the stage with Buddy Guy, Taj Mahal, Anders Osbourne, The Slide Brothers, and more as well as performing on The Tonight Show with Jay Leno, Late Night with David Letterman, and the Kelly and Michael show. The group toured through Europe in early summer 2013 as well as a heavily scheduled album release tour of “Lickety Split” on the mainland United States.
Since early winter 2013, Aaron has taken an extended hiatus from touring to pursue several musical projects as well as diverse original songwriting. He has been the frontman and principal songwriter of the local group The Cabin Killers who have performed at many regional venues and festivals. Aaron also spends time working on several Bluegrass and Old Time musical projects with members of The Henrie Brothers. He can be found playing regionally with bands such as The Cabin Killers, Giant Panda Guerilla Dub Squad, The Campbell Brothers, Axis Armada, Richie Stearns & Rosie Newton, South Hill Cider String Band, The Prickers and The Henrie Brothers, just to name a few.