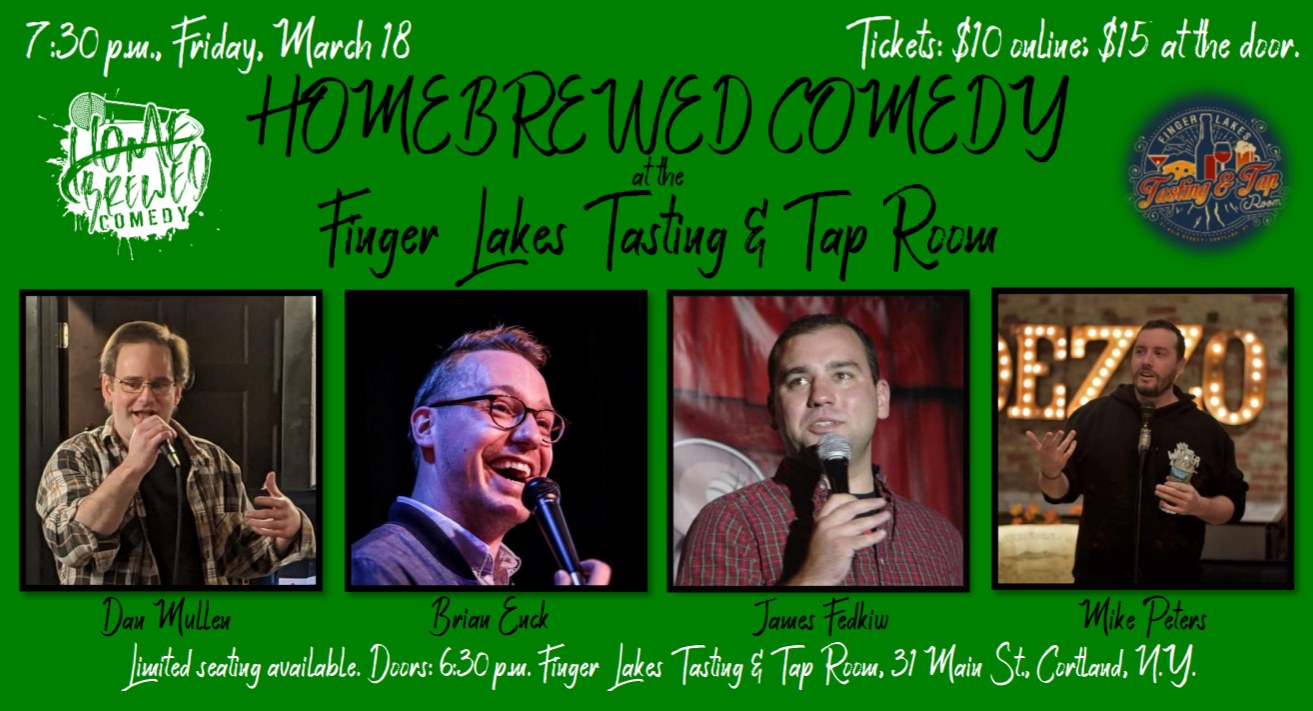 The laughs are back to the Finger Lakes Tasting & Tap Room when Homebrewed Comedy comes to Cortland on Friday, March 18.

The laughs are back to the Finger Lakes Tasting & Tap Room when Homebrewed Comedy comes to Cortland on Friday, March 18. Brian Enck is headlining the show, and he’ll be there with James Fedkiw, Dan Mullen and host Mike Peters.

The show will start at 7:30 p.m. Tickets are $10 online and $15 at the door. Due to limited seating, all online orders will be prioritized.

About the comedians:
Mike Peters, a Binghamton comedian, specializes in self-deprecating, observational humor. A contributor for Funny or Die, Peters performed at the Funny Bone in Syracuse, the Greenwich Village Comedy Club in New York City, won the Utica Brews Laugh Contest and Uptown Roast Battle and opened for Super Troopers’ Rabbit, Erik Stolhanske and Gilbert Gottfried. Peters produces shows all over New York and hosts his weekly podcast, On the Mic with Mike Peters.

One of the finest comedians in Elmira, Dan Mullen has a sharp mind and clever writing style that doesn’t disappoint an audience. With a steady stream of jokes that’ll make you think and keep you entertained, Mullen has delighted crowds all over New York. Mullen’s a regular in the Ithaca scene, was a finalist in the Funniest Person in Rochester contest in 2015 and is a contributing writer for Funny or Die.

James Fedkiw hosted Syracuse’s longest-running open mic at George O’Dea’s Pub and has performed at the Funny Bone and all around New York. He’s a regular in the Syracuse and Rochester areas, placed second in the Utica Brews contest and qualified for the Utica Cup finals.

Brian Enck got his start in the Rochester scene before moving to New York City. He moved back to Syracuse in 2021 and now works at the Syracuse Funny Bone. A regular at Caroline’s, LOL Comedy and other clubs before moving out of Brooklyn, Enck was featured in the New York Comedy Festival.